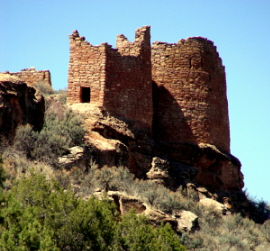 It was William Henry Jackson, the pioneer photographer of the 19th century, who gave Hovenweep National Monument its name.

Famous for his work with the Hayden Survey party exploring Yellowstone, he visited the Hovenweep area in 1874. He used the Ute Indian word meaning “the deserted valley “ to describe the area and the name stuck.

Hovenweep National Monument protects six prehistoric clusters of Native American ruins. Officially established as a national monument in 1923, the villages date from the Pueblo period of the mid 13th century.

They are dispersed over a 20-mile (32 km) area along the Utah-Colorado border on Cajon Mesa. The elevation varies from 5,190 to 5,880 feet above sea level.

Hovenweep National Monument is located in a vast, lonely region lying north of the San Juan River. The structures are made up of extraordinary groups of multi-tiered defensive towers – oval, square, circular, and D-shaped – perched on canyon rims and balancing on boulders. You’ll marvel at the skill of their builders. How did they do it? And why? 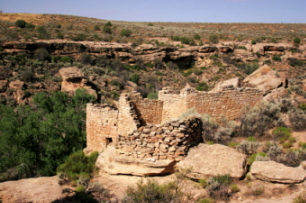 There are various theories about why Hovenweep’s towers were built. Storage buildings. Ceremonial buildings. Celestial observation towers. Or perhaps they were defensive structures. They had a most vital resource to protect - their water supply.

It’s a solitary and non-commercialized environment. A remote and peaceful area. Although this region may have been visited by nomadic hunters as long as 14,000 years ago, the Anasazi lived here from about 500 to 1300 AD.

They were the architects of these masonry towers and pueblos. The Hovenweep structures were discovered in 1854 more than 30 years before the more-famous Mesa Verde.

As mentioned above, the six major Hovenweep National Monument clusters all lie within a 20-mile (32km) drive of each other along the Utah-Colorado border. The units vary considerably in size. The largest one is the 400-acre Square Tower Group where the Ranger Station is located. This group and Cajon Ruins are both located in Utah.


How Much and For How Long?

The entrance fee is $6.00 per vehicle. $3.00 per individual or cyclist. Good for 7 days. An annual pass is $25 and is good for one year. This pass also gives you access to Arches, Canyonlands, and Natural Bridges.

The camping fee is $10.00 per night and it’s on a first-come, first-served basis. Hovenweep National Monument is open year-round except for winter holidays. In winter, it’s open from 8:00 AM to 5:00 PM. The rest of the year, 8:00 AM to sunset. 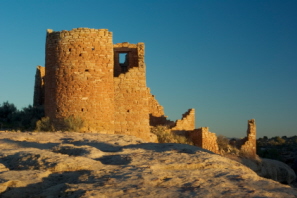 What Does Hovenweep Offer?

There’s a visitor center containing exhibits and typical educational material about the area and monument. Water and the usual array of unhealthy snacks are available at the Ranger Station. Stock up on real food and supplies at either Cortez, CO or Blanding, UT before you get to the monument.

Hovenweep’s archeological sites are unusually fragile. As in many areas of the arid southwest, crypto-biotic soils lie throughout the monument. These biological soil crusts are formed by living organisms and their by-products. They create a surface crust of soil particles bound together by organic materials. And they take years to recover - if they ever do - when damaged. 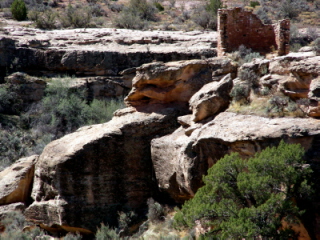 Since my rule of thumb for common sense is that it’s so uncommon, I’ll mention a few other “rules” here: