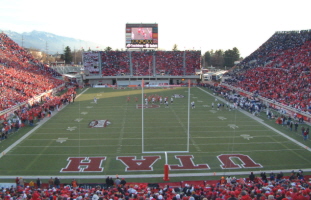 It’s only fitting I include this section about Utah sports.  That’s what brought me here from Canada.  A scholarship to play for the University of Utah Utes football team.

Sports are still a passion of mine.

Back when my wife and I were still going to college, we used to go to Utah Jazz games in the old Salt Palace. Tickets were so easy to come by we could even get $5.00 student discount tickets for a couple nose-bleed seats.

The Jazz were terrible and the NBA didn’t enjoy the interest it does now. They rarely drew big crowds so we could almost always move down to a better seat.

Today the Jazz play in the Energy Solutions Arena and have become one of the NBA’s most successful franchises. The only major league team among Utah sports teams. They reached the Western finals last year.

Those tickets in the rafters cost a little more. The lower seats cost a lot more. But the place is packed just about every night. 20,000 people.

John Stockton, Karl Malone and others have had their numbers retired. Deron Williams and Carlos Boozer are the stars now. 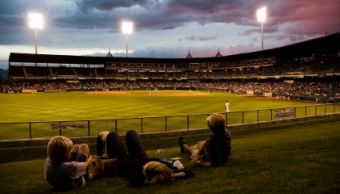 Over the years, some of my most relaxing and pleasant Utah sports memories are of sitting in Franklin Covey Field (and before that, old Derks Field) watching a baseball game.

Now named Spring Mobile Ballpark and home of the AAA Bees, this beautiful stadium has, without a doubt, one of the best views from behind home plate in the country. A panorama of the Wasatch Mountains.

The Bees are the Triple A affiliate of the Los Angeles Angels of Anaheim, many of today’s major league stars have played here. Just a fantastic place to spend a spring afternoon or summer evening whether you like baseball or not.

Are you a soccer fanatic? You can feed your passion by experiencing a Real Salt Lake game. They're the most recent addition to the Utah sports scene.

A member of Major League Soccer, they just moved into a beautiful new made-for-soccer stadium last year. Rio Tinto Stadium, like most of Utah sports stadiums, has a majestic view of the Wasatch Mountains.

An expansion team only four years ago, they just won the 2009 MLS Cup by beating the much higher profile Los Angeles Galaxy. I’ve got to give the ownership and management credit.

They’ve done a great job. They got the stadium built and had a fantastic championship run after squeaking into the playoffs.

I grew up in Canada where hockey is a part of life. I loved playing hockey growing up and still follow my favorite NHL teams. And hockey has been a part of the Utah sports landscape for close to 40 years.

The Utah Grizzlies play in the ECHL – the East Coast Hockey League. The league pretty much spans the country. It’s a couple notches below the NHL. It might be compared to Double A baseball.

The Grizzlies play in the E-Center in West Valley. A perfect building for hockey. It was the site for the hockey competition in the 2002 Winter Olympic Games.

Utah has eight university/colleges and two junior colleges. They all field teams in a variety of men’s and women’s sports. Some of the more visible and successful:

If there’s a sport you like, you can see it at one of the state colleges and junior colleges. They compete in just about any men’s and women’s sport you may want to see.