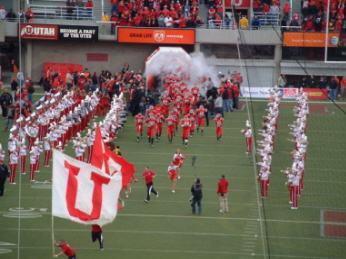 Utah Utes football.  The reason I first came to Utah.  On a football scholarship from Canada.  My alma mater.

Colorado accepted an invitation to join the Pac-10 the week before Utah. The two schools are the conference’s first new members since 1978.

The University of Utah Utes football team went where no non-BCS program had ever gone before when it qualified for a BCS bowl in 2004. Going undefeated (12-0). Ending up the season ranked No. 4 in the nation.

Pummeling Big East co-champion Pittsburgh in the Fiesta Bowl 35-7. With Quarterback Alex Smith a Heisman Trophy finalist and drafted as the No. 1 pick in the NFL Draft.

The only team in history to bust the BCS twice and go undefeated both seasons.

The University of Utah Utes Kick Alabama's A..
In The 2009 Sugar Bowl

Rice-Eccles Stadium is the home of the Utes. After a multi-million dollar facelift, this beautiful stadium hosted the opening and closing ceremonies for the 2002 Olympic Winter Games in Salt Lake City .

The intense media exposure during those Games showed the world what Ute players and fans already knew. The classic modern structure looking up at the jaw-dropping backdrop of the Wasatch Mountains and peering over the panoramic Salt Lake valley is, to Ute fans, the most beautiful stadium in the country. 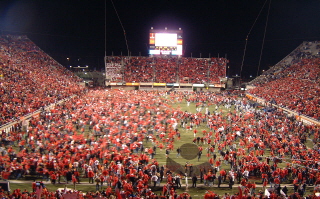 To “seasoned” Utes, the fact Rice-Eccles sits on the same ground as the previous Ute and Rice Stadiums, makes it even more beautiful. 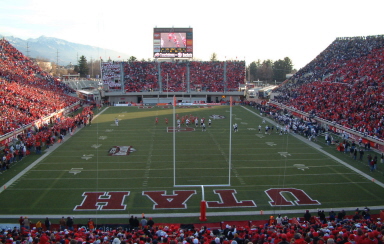 The University of Utah is located in Salt Lake City, the largest city in the Intermountain West with a metro population of well over a million people.

The Utes have a long and colorful history. Some facts about Utah Utes football going into the 2013 season:

If you want read everything you could ever want to know about Utah Utes football, you’ll find some amazing facts, figures and photos in the most recent Utah football media guide. Click here to go there on the Utah Utes website:

Are You A Fan Of Utah Utes Football?

Did you see one of Utah’s BCS Bowl games live? Or maybe another game stands out. Were you at the game in which Utah scored three times in the last couple minutes to beat Air Force? Or beat BYU 56-28 after getting pummeled for years?

Then you already know there are few things as enjoyable as watching the Utes beat up another opponent in Rice-Eccles Stadium.

Share your memory with people who’ll get a lot of joy out of it. With friends who share your passion!

But the difference here is that:

Do YOU have a great memory about Utah Utes football?
The best game you ever saw? Or most memorable? The best road game you ever attended?

Any fantastic photos of Ute games or players? Or your best tail-gating moments?

Then share them! They will be enjoyed by other people who love Utah Utes football... for years to come.

Thank you for sharing them with all of us!

Utes 2011 Opener Not rated yet
I was at the first game against Montana State. Of course, I'm there for every Ute home game. Yes, the passing game needs some work. Actually sucked. …

Utah Utes Open Up The 2011 Football Season Not rated yet
It's finally here. The Utes open up their inaugural season in the PAC 12 this week. The home opener on Thursday September 1 is Montana State. I'll …

Go Utes Not rated yet
Well I am a Utah fan and somebody is always bagging on my team (Utah Utes ). Well has any other team busted the BCSs 2 times and go undefeated both times. …

Utes - 27, Pitt - 24 Not rated yet
Dear Dave (the Pitt fan below). I noticed you didn't come back here and leave another message after the Utes sent Dion ... the Heisman candidate ... …

Pitt Slaughters Utes Not rated yet
University of Pittsburgh beats Utah on opening day. Everyone goes home to soak.

Back to Utah Sports