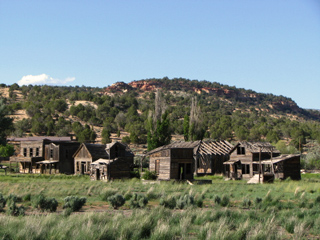 Why would I include a page about ghost towns in Utah on this site?  Well … for one thing … they're an integral part of the state’s history. And no matter where you go in the state, you’re likely to come across a “ghost town”.

Most people who think of a ghost town … at least I do … relate them to old mining camps. When the ore ran out, so did the residents. And since mining played such an intrinsic role in the state’s history, many of them fall into this category.

When you read a little about Park City History, you’ll see that silver mining attracted a diverse and colorful mix of people … like a magnet … to the area. But after the silver ran out, even Park City exhibited some of the characteristics of a ghost town.

Park City was even listed in a 1951 book Ghost Towns of the West. It prompted the town mayor at that time ... Will Sullivan ... to state that “there were still 1,150 of us live ghosts around then.” Of course, getting into the ski business changed all that.

Not All Mining Towns

Many of the ghost towns in Utah were actually agricultural towns. Water … usually lack of it … was the main reason they were abandoned.

But some were literally washed away by floods. Not too difficult to visualize if you’ve lived here for any length of time.

Most of the state … and early territory … of Utah was colonized by the early Mormon pioneers. Shortly after the Salt Lake Valley was settled … in 1947 … many families were called to move out and establish residency throughout the territory.

Many of these settlements were poorly planned and ill-fated. But many grew and flourished. Providing us with so much of the colorful rural flavor still prevalent throughout the state.

Dictionary.com says a ghost is a mere shadow or semblance; a trace. That’s what a ghost town is. It doesn’t mean it has to be totally “dead”. It may still be an active town. But just a shadow of what it once was.

Some of these towns may still even be quite active. And residents may not like seeing their town referred to as a ghost town. But towns with big declines in population and activity do fall into the definition of a ghost town. 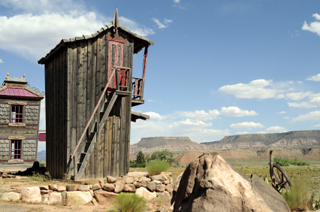 What Constitutes A Town?

Well, you’re talking about a grouping of buildings. Perhaps a school. A church. Maybe even a post office. And assorted other government buildings.

Now not all ghost towns meet the above criteria. But a small mining camp built around a hole dug in the ground … and there are many of these in Utah … can’t be classified as a town.

Under the above criteria, there may be as many as 150 ghost towns in Utah.

How To Classify Ghost Towns 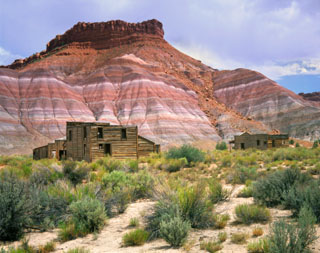 Take Nothing But Photographs
Leave Nothing but Footprints

The above quote is from Stephen L. Carr’s book, The Historical Guide To Utah Ghost Towns published in 1971. Like our natural wonders, tread lightly if you happen to visit one of these ghost towns in Utah.

People do ridiculous things far too often. Whether it’s taking a relic from a protected ancient native American site. Or knocking a piece of wood from an old historical building for a souvenir. It’s the same thing. Theft. And wrong.

Links to Ghost Towns in Utah

As I add individual pages for various ghost towns in Utah, I’ll add links below. Please click on the ones which interest you.