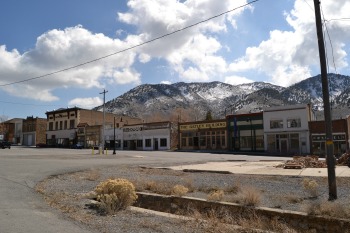 The former Utah mining town of Eureka Utah ... now a living ghost town with over 700 residents ... is found in the once immensely rich Tintic District.

But unlike so many of Utah’s mining towns, it didn’t just rise up for a few years and then die. It continued to produce ore for decades.

By 1910, after 40 years of activity, more than $75 million in ore had been dug from the area’s mines. And the town’s population had reached 8,000. In fact, in 1909, 80% of the stocks being traded on the Salt Lake Stock Exchange were Tintic properties.

If you drive east from downtown Salt Lake City on South Temple Avenue, you’ll be amazed at the magnificent mansions … beautifully preserved … still standing on both sides of the street. Many of them were built by the moguls who earned their millions from both the Park City and Tintic mines.

In 1869, a lone cowboy herding cattle through the lush grasslands of the surrounding valleys was seen carrying a large chunk of silver ore.

News of this soon spread and prospectors poured in. The “Tintic District” … named after a Ute chief of the same name … was soon established as many more strikes were located.

The next year, a couple locals were gathering firewood on the side of a hill. They found shiny silver ore right on the surface of the ground.

It’s not known whether they first uttered the word “Eureka” or whether Captain E.B. Ward … who bought out the claim … first said it.

But whoever is responsible, the Eureka Hill Mine and the town below soon took on the descriptive name. And by 1871, the first buildings were erected.

Watson Nesbitt … the mine superintendent … built a small stone fort to mainly keep claim jumpers from Pioche, Nevada out.

The cedar trees … so prevalent in this area of the state …. were cut down for hundreds of yards around the mine site.

The “Crazy Dutchman” … John Beck … thought that the rich ores from up the mountain just had to extend downward. He made his claim down below in the canyon and proceeded to dig.

200 feet below ground, he struck it rich. And the Bullion-Beck Mine soon became one of the biggest producers in the area.

Beck became a millionaire naturally. But he gave it all away. It was just too much for him.

If you’ve been to other Utah towns, you’ll soon realize the Mormon way was to survey and stake out everything. Order and structure was their nature. But not in Eureka Utah.

It grew without purpose. The main street did follow the canyon. But the side streets had no direction heading off haphazardly. Houses, outhouses, mines, and mills were seemingly intertwined without regard for order or privacy.

As with so many mining towns in dry Utah, water was a problem. Or lack of it. Water was piped to the mining operations from Homansville where wells had been sunk.

But drinking and culinary water had to be hauled to town in large barrels and sold. That is until an aqueduct was built from a mountain stream to Eureka.

Reverend Lawrence Scanlon … a Catholic missionary … arrived in 1873. He travelled the area and had the largest parish in the nation … 2000 square miles. And public schools were built in 1881.

There were two years of typhoid and smallpox outbreaks. And a flash flood down Main Street in 1890. A huge fire in 1893 wiped out 20 buildings. Resulting in most of them being rebuilt of brick, stone, or block.

Eureka was truly one of the quietest boom towns in the west. Perhaps because of the makeup of its citizens. Or because of its police force. Probably both. 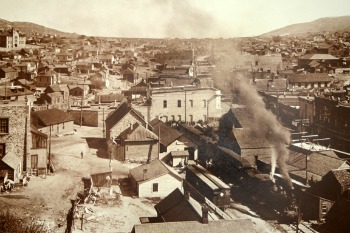 By 1910, Eureka Utah was the 9th largest city in the state with over 3,400 people. And churches, schools, department stores, theaters, hotels, lodges, and even a band. It was supposedly the smallest city in the country with an Elks Lodge.

Active mines were dug on both sides of the canyon:

Two railroads competed for the right to carry the ore leaving the mines … the Denver and Rio Grande Western and the Union Pacific. Headed to Salt Lake City, these trains had carried 45,000 tons of ore out of town by 1910.

Over the years, the reachable ore gradually ran out. High costs, lack of water, and lower prices shut most of the mines down by 1940. The last major mine closed in 1957. Is there more ore still in the ground? Very likely.

Eureka Utah lies 45 miles southwest of Provo … in Juab County … and 25 miles west of Payson on U.S. Highway 6. The 2000 census established the population at 766.

There are still many colorful and abandoned homes and false front stores on Main Street and on the side streets. Mine buildings and head frames still stand tall. There’s not much to keep you long though.

If you’re a hockey fan like me, you’ll be interested to know that Eureka is the birthplace of Frank Zamboni who was the inventor of the Zamboni. This is the machine used to resurface ice.