Zion National Park. Can there be a better example of what magic nature is capable of working over time than that sculpted by the Virgin River in southern Utah?

Near the mouth of this river, Mormon settlers built an outpost as they wandered throughout the wilderness some of them called Zion.

But some didn’t call it by that name. As wondrous as the canyon was, “It is not Zion,” according to Brigham Young. So, for many years, deferential followers called it Not Zion. Thankfully that name didn’t stick. 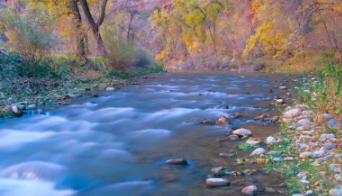 All Because Of A Virgin

The Virgin River, with its countless forks and tributaries, can be a quiet innocent stream. It can also be a raging monster.

It removes as much as three million tons of debris a year from within Zion Park and deposits it in the Colorado River. And this has been going on for countless years. The Virgin now serves as a natural corridor for touring the park.

There are two keys to how the Virgin’s seemingly small feeder streams have caused so much exquisite destruction. The nature of the surrounding rock. And violent summer cloudbursts.

The north fork of the Virgin River does its work on relatively soft material. Porous Navajo sandstone. Heavy rains, although usually short in duration, send waterfalls of all sizes cascading to the canyon floor below. 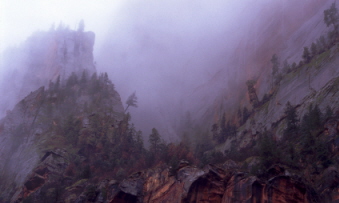 Over time, great slabs and blocks have collapsed leaving sheer ever-widening walls. What we are left with has even been described as “a Yosemite done in oils.”

But it’s not really like Yosemite’s granite at all. A canyon chiseled through sandstone doesn’t look like a granite gorge cut by a stream and polished by glaciers. No matter what the resulting colors.

Zion National Park just can’t be compared with anything else we have. And because of that, more than three million people come to see it every year.

I keep going back to color when I talk about Utah’s scenic and wild places. And like many of the other places described on this site, the colors in Zion National Park can be deceptive.

Always trying to fool you. Reflections and subtle changes in the atmosphere make them change before your eyes. 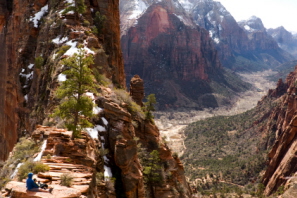 Zion is known as much for what there is to do than for just its incredible beauty:

The three main sections are Zion Canyon, the Kolob Canyons and Kolob Terrace. 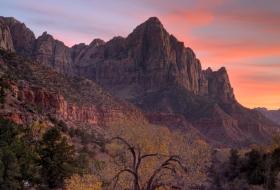 It has easy access right off Utah Route 9 near the park’s entrance. Zion Canyon embraces many popular attractions:

It’s an absolutely inspiring setting for photographers both professional and amateur. Many of the most familiar photographs ever taken of Zion National Park were taken in Zion Canyon.

During the tourist season, private vehicles aren’t allowed in Zion Canyon. But shuttle buses will take you through it stopping at all popular attractions.

You get to keep your eyes and hands free rather than worry about concentrating on navigating the narrow roads.

Also in Zion Canyon are:

The Kolob Canyons section of Zion National Park is located on the extreme western edge of the park. It can actually be seen from I-15 south of Cedar City. On the only road leading into this area is a well-placed Visitor Center.

If you want to experience Zion’s signature cliffs and canyons, this is a great way to do it. The road is paved and winds up a steep mountainside giving you easy access to viewing areas and trailheads. There is also a picnic area along the way.

One of the best hiking trails leads to Kolob Arch – the second-largest natural arch in the world. A large part of the Kolob Canyons area is backcountry.

The best way ... perhaps the only way ... to see it adequately is by hiking it. 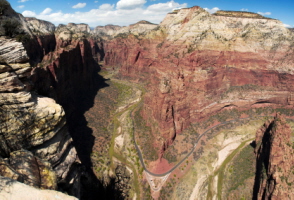 It’s a scenic drive. Steep and winding. Lush forest. With vintage Zion scenery all along the route. The Kolob Terrace rises up over 8000 feet (2438 m) in elevation.

Zion's famous Subway ... the park’s second most popular backcountry hike ... is found in this area. In a park of extraordinary beauty, the Subway is one of the most diverse and stunning canyons.

How Do You Get There?

Zion National Park is one of the many attractions in southern Utah. It sits at the confluence of three major regions: the Colorado Plateau, the Great Basin and the Mojave Desert regions.

The nearest towns are Springdale to the south. Orderville to the east. Cedar City to the west. Bryce Canyon is only 60 miles (96 km) away.

Entering the park from the south through Springdale is probably the best way to go if you exhilarate in sheer surprise and jaw-dropping terrain. But you’ll not be disappointed if you use one of the other entrances.

As mentioned above, you enter the northern part of the park – the Kolob Canyons section – via I-15 at exit 40.

This famous tunnel has six large windows cut through the sandstone. The highway ends at the Mount Carmel Junction right in the center of the park.

The amazing thing about having so much so close is you can delight in a varied yet unforgettable vacation experience in a single trip.

The name Zion means different things to different people. Often a metaphor. The name for a homeland. Or heaven. A place one aspires to end up.

Or even a sanctuary giving one peace of mind. Whatever it means to you, there’s no more aptly named place on this planet than Zion National Park.