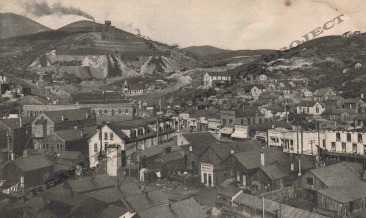 Mercur Utah is one of Utah’s most famous ghost towns yet no trace of it exists.  It quite literally died and was reborn several times.

The mining town produced more than $16 million of gold ore by 1913.  And became known for many firsts in both mining and technology.

Mercur was located in Tooele County … near its sister mining ghost town of Ophir … just over 20 miles southeast of the city of Tooele.

Probably the most amazing thing about this once thriving mining town is that despite once having a population ranging from 6,000-12,000 people … along with all the stores, homes, hotels, and businesses that went along with them … nothing remains!

So even though it would seem that a visit to present-day Mercur Utah might provide some interesting sights, it would be a waste of time.  The town site is closed to the public by its current owner … Barrick Mercur Gold Mines Foundation … which is owned by Barrick Gold.

In late 1869, prospectors looking for gold up Lewiston Canyon stumbled upon placer gold … surface deposits formed by the concentration of small particles … in some dry creek beds.

Although lack of water was always an issue in the area, small trickles of water coming down from the mountains made sluicing a possibility.

A few claims were made.  Nothing big.  But word spread and by 1870, the hills were alive with the sound of prospecting.  The fact that the nearby town of Ophir had sprung up because of the rich silver deposits nearby made it seem logical … or at least possible … that there would be silver here as well.

As mines with names like Sparrow Hawk, Silver Cloud, Marion, Mormon Chief, and Last Chance were opened up, a town named Lewiston sprouted nearby.

It was a typical mining town with saloons, gambling, and dance houses.  Most of the buildings were of simple wood construction.  And … of course … tents.  Always in mining towns.

The peak of mining activity occurred in 1873 when the Carrie Steele mine produced $80,000 worth of gold.  A stage line ran six coaches a day down to the flatlands while the population exploded to 2,000.  They even built schools and a church. 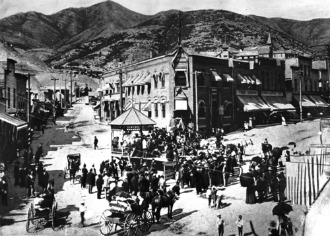 But by 1874, the ore began to dry up.  And by 1880, the buildings were gone.  At least for awhile.  As were the people.  The mines were abandoned.  Mercur Utah became a true ghost town.

But not everyone left.  A Bavarian prospector … Arie Pinedo … started looking around to see if he could find any other metals.

And … of course … he did.  Cinnabar.  A bright red mineral … the only important ore of mercury … sometimes used as a pigment.

So he named the town Mercur … albeit in his own native language.  He found gold in the cinnabar but couldn’t extract it with the methods of the day.  He eventually left the area.

From 1880-1890, there was a significant amount of mining activity in the area.  Gold was found in most of the assays but the technology didn’t exist to extract it from the underlying layers of rock.

A new town was built but the name Lewiston had already been taken by a town in Cache County.  So they went with Mercur.

As I said previously, water … or lack of it … was always a problem in the area.  So much so that door-to-door salesmen sold it to culinary users and non-drinkers of alcohol.  For those who drank alcohol, they just drank more.

In 1890, some of the ore was taken to Denver where a chemist had developed a cyanide process to extract the ore.  The process was able to release 90% of the gold in the Mercur Utah.  The boom was back on.

The Mercur Gold Mining and Milling Company established the first cyanide millin the U.S. at the town of Manning … just a few miles over the mountain from Mercur.  Water there was plentiful.

Despite the fact that large or even medium-sized nuggets were never found, the ground in the Mercur Utah area was literally full of gold.  And newly-developing technology was making it possible for that gold to be extracted.

In 1895, another mining engineer from Colorado … Daniel Jackling … started roasting the ore before the leaching process.  This allowed the last 10% of the gold to be extracted.

Utah was being admitted to the Union as a state on January 4, 1896.  The residents of Mercur Utah were planning to incorporate their town to coincide with that event.  But a few days before, most of the town was destroyed by a fire. 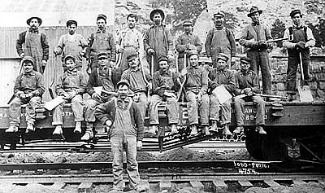 The town was rebuilt with many improvements.  Even a railroad … The Salt Lake and Mercur Railroad… was finished in 1896.  Due to the curves and switch-backs along the route, Shay geared locomotives were used to pull the train.  They weren’t fast but they were powerful and stable.

In 1896, Mercur Utah’s population was 6,000.  A new bigger cyanide mill was built … the Golden Gate Mill in 1898.  The world’s first all-steel, non-ferrous mining plant.  The first mining plant in the Western Hemisphere to use transmitted electrical power.

A 43-mile long high-voltage line was strung from the Olmstead Power Plant in lower Provo Canyon.  And water was brought in from Ophir Creek.

At this time, all the mines were producing and paying dividends.  Even old tailings were being processed to give up additional ores.

In 1900, all the small mines were combined into the Consolidated Mercur Mines Company.  The town was once again growing and thriving.  Most of the homes were on Golden Gate Hill or in Hekla Gulch.

In the center of town, the road leading down from the canyon forked into two narrow gulches …Geyser Gulch and Horse Thief Gulch.  Buildings lined both sides of the narrow streets.

There were two newspapers …The Lewiston Mercury and The Mercur Miner.  There was also a fire department, a church, schools, an opera house, a brass band, a dance hall, a dental office, several saloons, and many 24-hour restaurants. 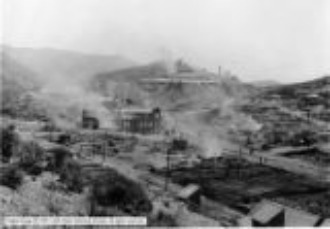 On June 26, 1902, in the lower part of town, hot grease in a skillet caught fire in a Chinese lunch shack.  The owner stepped out back and threw the burning grease on the ground.  But a gust of wind blew the searing grease against the wooden walls of the shack.

Within a matter of minutes, the entire lower part of town was engulfed in flames.  Within 2 ½ hours, every business building in Mercur Utah had been destroyed.  Even the stone ones.  Fortunately, most of the homes as well as the mill were spared.

But with the same fortitude you would expect from people who would move to such a place and build such a town, the town was rebuilt.

George H. Dern … the general manager of the mining company … became so popular that he was elected governor of Utah in 1924.  And appointed Secretary of War under Franklin D. Roosevelt in 1933.

By 1913, though, the gold mining operation became unprofitable.  The mill was shut down.  And all the equipment was taken down and sold.

By the time everything was dismantled, $16,500,000 in ore had been taken out of the surrounding mines.  In terms of today’s purchasing power versus 1913, that’s more than $394 million.

By 1917, the town was deserted.  Many of the buildings had been torn down with the salvageable lumber, stone, and bricks recycled and moved to other locations.

But, once again, in the 1930’s, Mercur Utah drew another breath.  Modern methods of gold extraction … and evolving refining methods … made it possible for new mines to open.  And old ones to be reopened.

In 1934, a new find in Horse Thief Gulch started things rolling again for the third time.  It wasn’t long before more than 300 men were working the new mines and the old tailings.

Not many buildings were built though.  Shacks and barracks mainly.  But no real town.  The people here traveled to Stockton or Tooele for supplies and a social life.

As World War II peaked, gold mining had been banned.  And the town folded up again.  There is no trace of Mercur Utah now.  Only sagebrush exists where a thriving residential district once existed.

In 1983, the Getty Oil Company reopened the Mercur area and demolished whatever structures remained.  American Barrick Resources Corp. … the current owner … started a strip mining operation but the ore eventually ran out as every last ounce was squeezed out of the surrounding hills.

The area is now off-limits to the  public although some of the back-roads … four-wheel drive only … may give you an overview of the area for whatever that’s worth.  Mercur's history is far more interesting than anything that might remain.