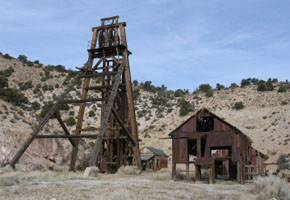 Frisco Utah sprung up out of the western Utah desert in 1876 after silver was discovered nearby.  Located at the southern tip of the San Francisco Mountains … hence Frisco … in the Great Basin area, it remains as one of Utah’s most intact ghost towns.

Frisco soon developed into the rowdiest town in this entire area. A notoriously dry region, 23 saloons sprung up to quench the thirst of the drifters and miners pouring into the area.

Murders became almost an everyday occurrence especially after payday. The scarcity of water means it had to be freighted in. And was actually sold door to door.

In 1875, two prospectors … James Ryan and Samuel Hawkes … were working a small claim in the area. The story has two variations. The first was that they passed a limestone ledge each day on the way to their claim. One day, they hiked up to the ledge, chipped some pieces away, and found silver.

The other version of the story has them passing by the ledge on the way from Pioche to Park City or Alta. In 1876, they sold their claim for $25,000. And thought they were making out like bandits.

The Horn Silver Mine soon began producing values of $100 per ton. And the town exploded. Other mines were dug … Carbonate, Golden Reef, Grampion. And each had their own smelter. Charcoal ovens were built using mountain mahogany, sagebrush, cedar, and dwarf pine.

When Jay Cooke and his partners from Salt Lake City bought the Horn Silver Mine in 1879 for $5 million, they convinced the Utah Southern Railroad to build a rail line. First to Milford. And eventually to Frisco. This allowed the movement of ore to the more economical Salt Lake City area smelters.

The arrival of the railroad also brought in more gamblers, prostitutes, and the kind of people who follow them. The population of Frisco Utah reached 6,000 between 1880-1885. And the growth continued: 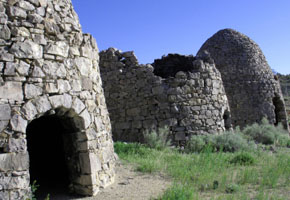 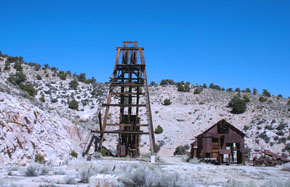 In 1885, the Horn Silver Mine caved in. Completely. Luckily, the cave-in occurred between shifts. Since most of the town’s miners worked in that particular mine, the cave-in resulted in their immediate departure. It decimated the town’s population.

Frisco Utah sits about 45 miles west of Beaver. To get there, you head west from Beaver on SR-21 to Milford for 30.4 miles. Continue to follow SR-21 for another 14.4 miles right into Frisco.

You’ll see five charcoal kilns … shaped like beehives … sitting amongst crumbling stone walls and rusting equipment. Even the remains of a mill. There are several antiquated still-standing frame buildings … stores and houses … and some even sturdier structures.

An interesting … even eerie … place to explore.