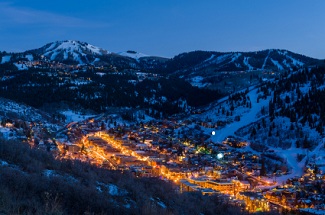 Park City Mountain Resort isn’t just a skiing resort.  But that’s what it’s famous for.  It’s one of the most popular skiing destinations in Utah.   And the world.

Only 34 miles east of Salt Lake City. With a wide variety of activities for both summer and winter conditions, this resort entertains year-round.

Think about a base elevation of 6,900 feet. With the summit of the highest peak reaching 10,000 feet. And 3,300 acres of skiable terrain. You want Utah powder? The average winter snowfall is 360 inches.

Treasure Mountain Resort entertained its first skiers on December 21, 1963. A mining town turned ski resort. An attempt by a mining company to boost revenue for a mining town suffering financially since the mine … what the town was built on … had ceased operation.

It was an immediate success. In the beginning, that same mining company used the mine to get skiers to the top of the mountain. Yes, that’s right. A subway system was created taking skiers to the heart of the mountain they wanted to ski by means of the old mining shafts. Once near the center, an elevator system lifted skiers to the summit. No, I’m not kidding.

Back when I was attending the University of Utah and playing football there on a scholarship … forget about the year … I experienced this feeling. And I didn’t like it.

Along with several of my teammates, we were cast as extras in a terrible TV remake of “The Time Machine”. We took a train into the heart of the mountain … into the mine … where we spent an entire day filming. I spent most of the day just hoping I would get out alive.

Since then, the resort has become a popular year-round attraction. It has even been featured in the video game Shaun White Snowboarding available for multiple gaming platforms. In 2002, it hosted several venues for the Utah Winter Olympic Games.

Currently, the resort boasts multiple skiing schools. Some of them are owned by the resort park while others are privately owned. Many of the Olympic venues are openly available for public skiing.

Excellent snowfall and high terrain provide conditions Utah is famous for. Powder. There are 17 lifts serving the trails during the winter season. And 4 terrain parks for snowboarding. There’s even an Olympic-sized half pipe along with slalom and giant slalom courses on the various peaks.

Park City Mountain Resort is truly a year-round resort. And summer is just as much fun as the winter up here. With numerous mountain biking and hiking trails to explore.

There’s an amusement park called Little Miner's Park available on-site for children. It celebrates the mining heritage of the area while providing rides and entertainment for kids.

For the more adventurous folk, the resort has several unusual opportunities. Like a series of zip lines. 110 feet in length, they run down the side of the mountain.

If that isn't enough adrenaline, you can enjoy a ride on one of the four Alpine Slides. Always one of my family’s favorite summer activities, this slide system seats the rider on a lunge-style cart and sends you speeding down the mountain on slick concrete slides. Some of the courses are over 300 feet long.

Park City Mountain Resort is less than half an hour from Salt Lake City. This makes it easily accessible for a day of activity.

From Salt Lake City International Airport, take I-80 eastbound toward the city center. This route will turn south through the city on I-15. Look for the I-80 east signs pointing you in the direction of Cheyenne, Wyoming.

Watch for the signs leading you up Parley’s Canyon. 21 miles up the canyon, just follow the signs into Park City and up to the resort. 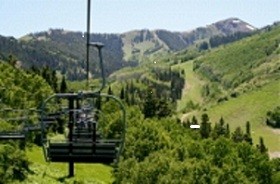 Park City Mountain Resort has many places to stay both on and off the mountain. There are numerous hotels at the resort with whatever amenities you’re looking for.

Cabins, townhomes, condos, and vacation homes are available for rent in Park City if you’re bringing a group. Or if you like privacy, a kitchen, and comfort like I do.

In March 2012 … as you may or may not have heard … Park City Mountain Resort announced that it had filed a lawsuit against Talisker Land Holdings, LLC, the owner of Canyons Resort as well as United Park City Mines Company. Both are partial land owners of the resort.

The resort claimed they had initiated talks with Talisker to extend their lease to 2051 and that Talisker has refused to agree to the terms threatening to close the resort all together.

Talisker claims that Park City has failed to agree to the new terms set down by Talisker and that they have never threatened to close the resort.

Park City Mountain Resort is suing Talisker for $7,000,000 for compensatory and punitive damages for the threat of the closure of the resort.

Back to Utah Ski Resorts