Utah Has The Longest Arches In The World!

Utah is famous for having more natural rock arches than any other area in the world.  Utah arches are so numerous and famous we even have a national park ... Arches National Park ... with over 2,000 of them!

But there have always been arguments about which arches really are the longest spans in the world.

Well, over the past three decades, a group of professional and amateur geologists – members of the Natural Arch and Bridge society - determined that the “size” of these spans should be determined by measuring the total horizontal length of the opening.

They recently came out with their official list. And Utah arches have six of the top 10 spots in a listing of the biggest arches in the world! Landscape Arch in Arches National Park is officially the longest arch in the world. The second longest is Kolob Arch in Zion National Park .

Only one of the top 10 is located outside of the American Southwest. As you might expect, there were some casualties also. Kachina Natural Bridge – another one of the Utah arches - in Natural Bridges National Monument 35 miles (56 km) west of Blanding, Utah was measured at “only” 192 feet long.

But today, they use lasers and Google Earth to do the job more quickly and efficiently. And the amazing thing is there may be many more yet undiscovered.

You would think that there is nowhere on this planet where man hasn’t left his foot-print. But number 9 on the list wasn’t discovered until 2006! By a group of climbers. Outlaw Arch on the Colorado side of Dinosaur National Monument. 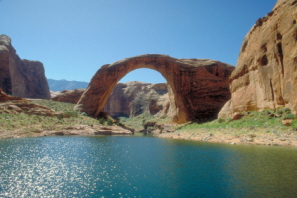 As you can see from this list, Utah arches do indeed take up six of the top 10 spots in the world.