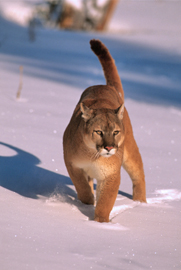 Depending on what part of North America they happen to live, cougars are also known as:

These large, powerful cats have the largest geographical range of any land animal in North America. From the Canadian Yukon to the South American Andes.

Cougars prey primarily on ungulates. Deer. Elk. Moose. Bighorn Sheep. And, to the displeasure of ranchers and farmers, domestic cattle, horses and sheep.

They Are Territorial and Reclusive

Cougars are territorial. They range in areas of up to 100 miles. Are solitary hunters. And they are most active at dawn and at dusk.

Cougars in Utah are reclusive animals. And they usually try to avoid people. Although you may hear of an occasional attack on humans, such attacks are rare.

Does that knowledge make it more comforting when you actually see cougar tracks in the wild? I don't think so. Several years ago, I was hiking just above the Salt Valley with my son and a friend. Right up East Millcreek Canyon minutes above Wasatch Boulevard.

As we were walking along an open trail, my friend looked down and called me back. He's tracked cougars with his dogs so he knows what he's looking at.

He pointed out fresh cougar tracks right on the trail! The impression made by the big, round pads sent a shiver up my spine.

In 1967, the Utah State Legislature changed the cougar’s status to that of protected wildlife. Since then, they have been considered a game animal with specific hunting regulations.

These hunts are used to control the population of cougars in Utah. In units where there appears to be more severe depredation of mule deer and bighorn sheep, more permits are issued.

The laws pertaining to cougars in Utah are based on several factors. A Nuisance Complaints Policy was established in 1999 to protect private property and ensure public safety.

When a cougar’s actions result in damage to private property, causing a nuisance, or concern for human safety, it will be euthanized.

Sick and injured cougars, as well as orphan kittens, are also euthanized. The Division of Wildlife doesn’t even attempt to rehabilitate these animals.

The only exceptions? Those that wander into suburban areas and have been deemed to be non-aggressive to humans, pets, or livestock are relocated.

Nearly all cougars harvested in Utah are done so with the help of dogs. There is simply no other way to do it. A friend of mine has treed many a cougar using his dogs. Almost all were treed for a photographic experience rather than to end the cougar’s life.

Pursuit (chase or non-kill seasons) provide a thrilling opportunity to view these magnificent wild felines up close. Maybe take some photos. And then they are left to go on their way.

The pursuit season usually follows the hunt but there are some units open year-round for pursuit. And some closed entirely to pursuit.

The elusiveness of cougars makes it difficult to estimate their population in Utah. Nonetheless, depending on what parameters are used to estimate their numbers – there is no cougar census – there are between 2,500 and 3,000 cougars in Utah.

Back to top of Cougars in Utah