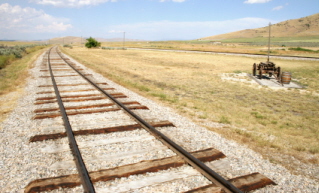 The Golden Spike National Historic Site is located north of the Great Salt Lake at Promontory Summit in Utah.  It commemorates a truly historic event.

On May 10, 1869, a telegraphic message flashed across the country. “The last rail is laid, the last spike driven, the Pacific Railroad is completed.” The first Transcontinental Railroad was completed in 1869.

The two railroads were joined by four symbolic spikes. Two of them gold. Every year on March 10, The Last Spike Ceremony is reenacted.

And on every Saturday and holiday from May 10th to September. During the Winter Steam Festival, you can also see the ceremony on the last weekend in December.

On your visit to the Golden Spike National Historic Site, you’ll be able to see working replicas of the two 1860's steam locomotives - Jupiter and 119. They operate from May through September.

One thing about the original Golden Spike. Being made of 17.6 carat gold, they couldn’t drive it. It wouldn’t have survived a blow from a spike maul.

Originally, the idea was to cast a solid gold or silver section of rail. But it was decided to use a more practical golden spike to commemorate the event. About $350 of gold was used to make the spike. It was engraved on all four sides and on top. The top of the spike was engraved with the words, “The Last Spike.”

Summers in northern Utah are hot and dry. Temperatures often reach well into the 90’s F. On the other hand, winters are cold. Temperatures can dip well below freezing. And precipitation is common.

Spring and fall are the best times to visit the Golden Spike National Historic Site. But be prepared for just about anything at this location on the north end of the Great Salt Lake.

Things to See Nearby

A trip to the Golden Spike National Historic Site will also enable you to see several other great attractionsnearby. You can make a great day of it by also visiting one or more of the following Utah attractions.