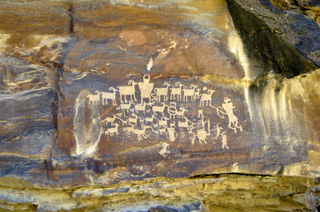 Perhaps the furor over the dust being kicked up and covering the Nine Mile Canyon Utah petroglyphs is all for naught. In fact, the dust isn’t showing up at all according to a story in the Salt Lake Tribune on October 7, 2011.

The worry … from environmentalists and others … is that the dust kicked up by trucks moving up and down the canyon road … an unpaved road … would lead to disaster for the ancient rock art panels carved into the canyon walls centuries ago.

But it hasn’t happened. Environmental-monitoring consultants just released their first annual report. Geochemist Braden Hanna of Itasca Denver Inc. said that samples from five petroglyph panels show dust minerals aren’t coming from the road bed. And there are no residual corrosive road salts on the panels.

Basically it means that dust from the road isn’t getting to the rock art. Or never was. That’s good news both for those wanting to preserve the art. And for the company … Bill Barrett Corporation … using the road to get to and from the West Tavaputs Plateau.

But a different problem has emerged. New graffiti … scratched and even chiseled into the sandstone … has appeared in the last year. Not from a big corporation. Just from idiotic visitors.

Archaeologists had feared that the heavy truck traffic up and down the canyon would cover the rock art with dust and eventually lead to its demise. A 2010 deal between the BLM and the company allowed 626 wells to be dug in the West Tavaputs Plateau to tap the rich oil and gas preserves.

That’s great news for the Nine Mile Canyon Utah petroglyphs. And for everyone concerned.

Back to Nine Mile Canyon