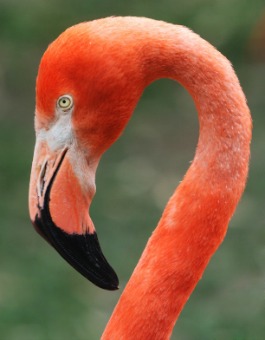 (not a photo of Pink Floyd)

Pink Floyd the flamingo became almost a cult figure locally back in the 1990's and early 2000's.

If you happened to think you saw a pink flamingo on the Great Salt Lake back then, you were right.  It was Pink Floyd.

He escaped from Tracy Aviary in 1988 and made his way out to the lake.  Over the years, he became somewhat of a celebrity.  How did he escape?  They forgot to clip his wings.

Bird-watchers spotted him every winter hanging out with some seagulls and feasting on brine shrimp.  He made his way to several reservoirs near the Utah-Idaho border during the summer.

But he was also seen 30 miles south of the Great Salt Lake one summer.  And just north of the lake another summer.  He was even seen flying with tundra swans to the north.

In 2003, a group of concerned bird-lovers thought that Pink Floyd could use some company of his own kind.  Friends for Floyd raised $50,000 and offered to import 25 flamingos from South America.

Utah state officials put the nix on that idea ... though ... as they had no idea how such a move would affect the lake's fragile ecosystem.  So he would have to make do with the feathered friends he was hanging out with.

Flamingos can live up to 60 years so there's no telling how long he could have lived on the lake. He was reportedly last seen in Idaho in 2005.  But there was one unconfirmed sighting in 2010 at Saltair.

Some facts about Pink Floyd: