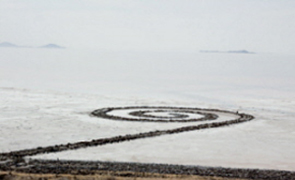 When a New York City artist named Robert Smithson approached Utah contractor Bob Phillips to help him build, he thought the artist was crazy. He was the last of many to turn him down.

But when Phillips finally gave in and agreed to help build the Spiral Jetty, the result was an iconic masterpiece that became one of the world’s most famous earthworks. Earthwork is another name for a work of environmental art.

But not so famous in Utah. In fact, most Utahns don’t even know it’s here. Or that it’s one of the most famous works of art in the world. One which draws people from all over the world to see it in person.

Smithson died in a plane crash three years after finishing it. He was in Texas scouting for another project like this one.

The Spiral Jetty was submerged under the rising Great Salt Lake within two years of its completion. In fact, it was 16 feet under water by 1987.

Anyone living in Utah during that time is aware of the massive flooding which inundated the state for several years.

But … as it has many times … the lake’s level once again started falling. The Jetty emerged in 2002. Smithson realized right from the beginning that the lake’s level would rise and fall over the years but the Spiral Jetty would always be there.

The Spiral Jetty is actually made of black basalt rock, earth, and salt crystals. Phillips … the contractor who helped Smithson build the sculpture … still visits the Jetty to this day. Because “it’s beautiful” as he was quoted in a Salt Lake Tribune article recently.

The earthwork masterpiece is found in a shallow bay … Rozel Point … at the north edge of the Great Salt Lake. At the time, mineral and algae concentrations tinted the water a reddish color.

These concentrations ebb and flow as the lake’s level rises and falls. There’s a rock escarpment at the point so visitors can get a great view of the Jetty even when submerged.

Black rock and red water at first. What a contrast. But it doesn’t look quite like that anymore. As the lake’s salt has encrusted the rock, it has lightened in color. Almost light grey now.

Dia Art Foundation … New York-based … now jointly owns the copyright on the Spiral Jetty along with Robert Smithson’s estate. They own the rocks, the mud, and the salt crystals that compose the sculpture. It lies on state and federal land which is leased by Dia.

One interesting note about the Spiral Jetty. In 2008, a Canadian company proposed that they be allowed to drill for oil nearby. 3,000 letters of protest later, the bid was rejected by the Utah Department of Natural Resources.

Phillips says that one of the things that drew Smithson to the area was exactly what well-meaning environmentalists were trying to avoid. Abandoned and rusting hulks of trucks, trailers, a military vehicle, and oil equipment lay nearby when he found the perfect site.

But, in 2005, those relics were “cleaned up” and removed. Phillips says this would actually have saddened Smithson. His belief was that the lake would undergo many changes over time but the Jetty would remain. And those castoffs were just part of the location’s “natural history”.

To get there, head west from Brigham City towards Promontory Summit via state highways 13 and 83. Brigham City is located 54 miles (84 km) north of Salt Lake City.

Head right past the Golden Spike National Historic Site . Or ... even better ... stop and see that also. The Spiral Jetty lies 15.5 miles (24.9 km) south of the Golden Spike.

Back to Great Salt Lake