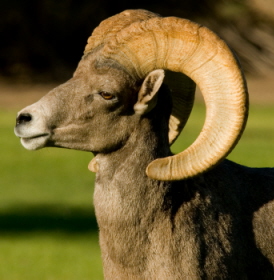 There are three subspecies of Utah bighorn sheep:

Viewing bighorns in the wild is a truly memorable and exciting experience. They are one of the most magnificent animals in North America. And they live in some of the most remote and beautiful areas in the west.

Have you ever seen one of those nature videos of two rams charging each other at full speed? Crashing their horns together in a battle for dominance. In slow motion, it’s even more astounding.

According to biologists, Utah bighorn sheep were the predominant big-game animal in the state prior to the arrival of the pioneers. Agriculture and domestic sheep grazing pretty much wiped them out. Domestic sheep and wild sheep simply can’t co-exist.

Estimates in 2000 put the number of Rocky Mountain bighorns in Utah at 1,000. California bighorns on Antelope Island at 100. And desert bighorns at around 2,800.

The total population of all three sub-species of Utah bighorn sheep is now estimated at more than 5,000. But it’s an ongoing battle as bighorns have very little resistance to most of the diseases domestic sheep simply shrug off.

California bighorns fall somewhere between the other two in terms of size. And in all three sub-species, ewes are about 60% as big as the rams.

One interesting point to make note of is that recent studies indicate there may be no genetic differences between Rocky Mountain and California bighorns. They may actually be members of the same sub-species.

Some fantastic bighorn sheep viewing opportunities are available throughout the state. If you go to one of the following places, you should give yourself a great chance to see some: