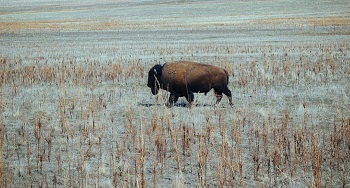 Utah bison numbers continue to grow.  The American Bison is still, to some people, a mythical creature.  An icon of the old west.

And, yes, they almost became mythical. Just over a century ago, they were almost exterminated. Only a few hundred from extinction.

Some estimates put the population of bison roaming North America prior to European settlement at 50 to 60 million. But by the 1890s, they had been “hunted” to near-extinction. Not hunted really. Exterminated. As few as 800 remained!

Without quick and massive efforts by conservationists to save the species, they would have very quickly become extinct.

Today, they are almost plentiful in certain parts of the U.S.A. There are three Utah bison herds.

There are only four free-roaming bison herds in North America:

The Henry Mountain herd roams an area of over 300,000 acres in southern Utah. An area stretching from Hanksville in the north to Lake Powell in the south.

They range at elevations from 4,800 feet to 11,500 feet above sea level. And wander the variety of terrain in this part of the state.

Terrain that includes steep mountain slopes, benches, foothills, flat mesas, and deeply eroded canyons. They can found throughout this area at all elevations regardless of the vegetation or season.

This herd originated in Yellowstone National Park. In 1941, the Carbon Emery Wildlife Federation and the Utah State Department of Fish and Game released 18 bison - 3 bulls and 15 cows – in cooperation with the National Park Service.

These Utah bison were released near Robbers Roost Ranch in the San Rafael Desert. Most of them established their residence in this area. But some of them – mostly bulls - moved north and west. Five more bulls were brought in the next year.

The population has varied over the years. Recent estimates numbered the herd at approximately 340 adults and calves. The number reached 559 in 1990.

The bison numbers in this unit are managed by sport harvest. Hunting. It’s a once-in-a-lifetime opportunity in a uniquely wild situation. The permits are set to maintain the herd at or below the optimal population objective. 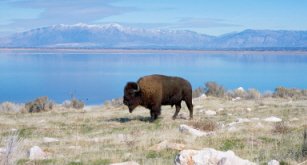 One of the most intriguing features of Antelope Island State Park is the variety of wildlife. But despite its name, the island’s best known inhabitants are the hundreds of bison roaming the island.

The herd varies from 550 to as many as 700. Not only is it one of the largest publicly owned bison herds in the country, it’s one of the oldest. Two Utahns, William Glassman and John Dooly, made Utah bison a reality by bringing them to Antelope Island in 1893.

Today, the bison herd is managed to maintain a population of 550. New calves born each March through May swell the population to more than 700.

If the herd was allowed to exceed this number, the island’s grasslands would soon be overgrazed. This fine balance is maintained through vigilant management. The large herd flourishes while providing a suitable habitat for other wildlife species.

The annual bison roundup at Antelope Island State Park Utah takes place at the end of October. It’s one of the great fall spectacles in northern Utah.

A team of horsemen and helicopters drive the bison to corrals on the island’s north end. There they are vaccinated and given a general health evaluation.

Excess bison are sold at auction. A few are designated for the annual bison hunt in December. The Division of Wildlife Resources oversees this hunt.


Like all other Utah bison, they were wiped out in the Book Cliffs until the Ute Indian Tribe reintroduced a herd on the Uintah and Ouray Reservation in 1986.

Initially, they reintroduced 6 head. Other releases followed and by 2007, the population was estimated at 580.

Since they were first reintroduced, they have started to move into some of their historic range in the Book Cliffs.