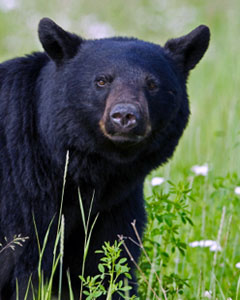 The Utah black bear has been a protected species since 1967.  The black bear is the only species of bear that lives in Utah.

At one time, black bears were found in all forested areas of North America from Alaska down to Mexico. And from California to the east coast.

While their range has been greatly reduced, black bears are still found in 38 states, 11 Canadian provinces, and 7 Mexican states.

You’ll find Utah black bear in most of the forested areas of the state.

Exceptions would be the Deep Creek Mountains, the Pilot Range, the Henry Mountains, and the Raft River Mountains.

Based on harvest numbers, Utah may have the smallest bear population of any of the western states except Nevada.

A Little About Black Bears

Black bears are evasive and secretive. Ordinarily they avoid humans. And seek refuge in the deep forest. They live long lives. And they have a low yearly reproduction rate.

Black bears vary in color from brown to dark chocolate to black. And in-between. In the east, black bears are generally black with a white triangle on the upper chest.

For some reason, bears in Utah and Colorado seem to be larger than those in Idaho. Genetics? Better food supplies? We don’t know why.

Black bears have an extremely keen sense of smell. And they are exceptional swimmers. They’ve been known to live as long as 20 years. Sometimes longer.

The natural inclination for hunters to take larger bears might account for the fact that studies in Idaho show females live longer than males.

What Do Black Bears Eat?

Utah black bear are omnivores. They eat either plants or other animals. In fact, they’ll eat whatever they can digest. Roots. Berries. Nuts.

But also carrion and insects. Hence the potential problem if you find a dead animal. You may be near a bear’s intended meal.

From 1967 through 1989, unlimited hunting permits were issued for both a spring and fall season. This was changed to a limited entry spring and fall hunt which ran from 1990 to 1992.

But since 1993, the spring hunt has been eliminated. There is now only a limited entry fall hunt.

A couple things have resulted from the elimination of the spring Utah black bear hunt:

The general public may fear black bears far more than necessary. Even though there are thousands of man/black bear encounters in North America every year, an attack rarely results. Of course, there is no making up for stupidity and lack of respect.

But something strange happened in Utah in July of 2009. Five black bears were shot and killed by individuals in a period of 12 days. One by a cattle operator fearing for his livestock. And four by people who felt threatened by the bears.

There were no more bear sightings than in previous years. And the Division of Wildlife Resources hadn’t had even a single case like this for years.

Perhaps it was residual nervousness over a bear killing an 11-year-old boy two years before at a Utah campground.

According to the DWR, bears are more afraid of us than we are of them. But there are three things that can cause a black bear to change its behavior:

And why would a bear be expecting a free meal? Because he’s gotten one before. And he liked it. And he developed a taste for it.

The bottom line? Black bears can indeed be dangerous. And you need to treat them with respect. One difference between black bears and grizzlies is that grizzlies will attack and kill in defense of cubs.

Female black bears will pound the dirt and act aggressive. But they’ll normally bluff charge and then retreat. It is very important not to run from a black bear.

The best way to avoid a bear attack is to avoid bears. Or help them avoid you. Hike during daylight. Don’t go near animal carcasses. Avoid bright colors and unnatural smells. Hang food supplies at night.

If You Encounter a Bear

So if you come face to face with a Utah black bear in the wild, what do you do?