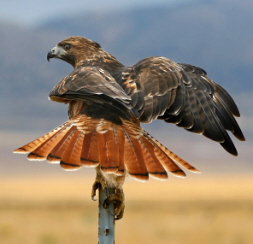 Although there are a wide variety of Utah hawks , the most commonly seen bird of prey in the state is the Red-tailed Hawk. A beautiful bird.

Although they move south in winter from the northern latitudes, some Utah hawks live here year-round. They are usually found in open country where trees and other elevated perches allow easier hunting.

You’ll see them soaring over wide-open fields. Slowly circling with their out-stretched wings. Also look for them on telephone poles searching for their next meal.

The Red-tailed Hawk has a raspy scream that you’ve probably heard before. Because if you’ve “heard” a hawk or eagle onscreen, it’s almost always the sound of a Red-tailed Hawk that they’ve used.

Red-tailed Hawks are large birds with extremely sharp talons. They will very aggressively defend their nests and their territory. And won’t hesitate to chase away other raptors such as eagles, hawks, and Great Horned Owls.

Mated pairs usually stay together until one of them dies.

If you drive into rural Utah, keep your eyes open along fence posts and telephone poles. Especially in open areas. Chances are good that the first hawk you see will be a Red-tailed Hawk.

Look for the broad, rounded wings and short tail. And for field marks like the dark bars on the wings’ leading edge.

Red-tailed Hawks tend to be more numerous in winter. That’s because birds from the far north arrive and join the birds that live in Utah year-round.

Most of the hawks captured for falconry in the US are red-tailed hawks. For two reasons. They are common. And they are easily trained for hunting.

Only younger hawks ... passage hawks ... can be taken by falconers. They must have left the nest. And they must be less than a year old. Adults may be breeding or rearing chicks so it is illegal to take them.