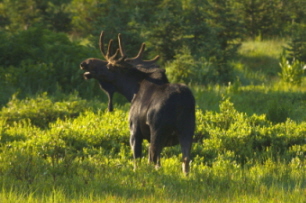 Utah moose didn’t migrate into the state until the early 1900's.  They wandered in from Idaho and Wyoming on their own.

In fact, the first recorded sighting of a moose in Utah was in 1906 or 1907 at the head of Spanish Fork Canyon.

It was many years later – in 1947 - that it was determined a resident herd had become established on the North Slope of the Uintas.

The first legal hunting season for moose in Utah was held in 1958. And a hunt has been held every year since. But a Utah moose hunt is still a one-in-a-lifetime opportunity.

It is now common for young moose to wander out of the mountains and into populated areas along the Wasatch Front. Especially during the spring and summer months. But these “nuisance moose” are quickly relocated.

Moose have done well in Utah in recent years. Their population is now estimated at 4,100.

The moose is the largest member of the deer family. Four subspecies of moose are recognized in North America.

The Shiras or Wyoming moose is found in Utah. If you’ve encountered a moose up close, you already know they're immense. But the Shiras is actually the smallest of the four subspecies. Mature Shiras moose bulls weigh considerably less than other moose. But they can still reach 800 pounds.

Since they are the biggest member of the deer family, it only makes sense that moose grow the biggest antlers of any mammal. Yes, they are for show. Antlers are used to exhibit dominance during the rut or breeding season. Even for fighting other males. And for protection against other animals.

The rut starts in early September typically peaking around the end of the month. Both bulls and cows are very vocal during the rut. And they become very aggressive. If you encounter one, get out of its way.

Where Will You Find Utah Moose?

The numbers have gradually increased over the years. They are very common throughout the mountains and valleys of northern Utah.

Moose are found in the coldest climates in the world. Winter weather and deep snow doesn’t seem to bother them. Utah moose typically live at higher elevations but they do wander into lower-lying areas.

Their relative intolerance for hot weather and love for higher altitudes may be the reason why transplantation to central and southern Utah hasn’t worked.

Moose are quite common in the northern half of the state. Their numbers have been steadily rising. But that growth may have leveled off in many of the units as civilization encroaches upon prime habitat.