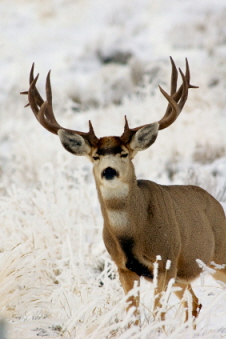 Few experiences will get your heart pounding more quickly than seeing a monster Utah mule deer buck – sporting a huge rack – close up in the wild.

Happens to me every time I have the privilege of seeing one. Maybe it’s because I’ve come to realize how hard it is to actually get close to one.

By most recent accounts, there are not as many deer in Utah as there used to be. Encroachment by civilization – too many people wanting to build on the best available land – is the main culprit.

Unlike elk, mule deer don’t adapt well when their habitat is taken away. Taking a drive on the east benches of Salt Lake City during a harsh winter will let you see that first hand.

Nonetheless, Utah mule deer are still seemingly everywhere. But not like it used to be. The most recent estimate is 318,451 statewide. Compared to the DWR (Division of Wildlife Resources) goal of 411,300, you can see civilization is causing a problem.

You may be wondering why you don’t hear about whitetail deer in Utah. Well, that’s because there are no whitetail deer in the state. Sure there stories of an occasional whitetail wandering in from a neighboring state. But such occurrences are rare.

One thing that’s apparent to anyone who has hunted Utah mule deer for any length of time. The deer population here has been declining. For the last 30 years to be exact.

Many factors can be blamed for the decline. But the main reason is becoming a common theme throughout the country. There’s just less land available for mule deer to thrive.

And the land that’s left has deteriorated to the extent it’s now detrimental to healthy mule deer numbers. Whenever a species like mule deer has less suitable habitat, disease and predation by other species are magnified.

Favorable Utah mule deer habitat is also shrinking due to an overall climatic trend in the state. A trend toward drier conditions. Drought has existed in a lot of the state for several years. 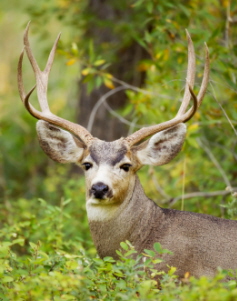 Mule deer are the most important game animal in Utah. Thousands of families still plan their falls around the deer hunt. Deer hunting in Utah is strongly rooted in the social fabric. And a lot of people in the state make their living catering to people who love the fantastic outdoors.

There are few people who don’t enjoy seeing deer in the wild. A lot of time and a lot of money is spent in the state each year watching and photographing Utah mule deer. Areas that produce large bucks are attractive to hunters as well as people who enjoy just seeing them.

And Utah has plenty of areas that still produce large bucks. Even “monster” trophy bucks. Head down to the area south of the Paunsagaunt Plateau in southern Utah in late fall.

Drive some of the back roads east of Kanab with a camera and be careful your jaw doesn’t hit the steering wheel. I’ve been there and seen them.