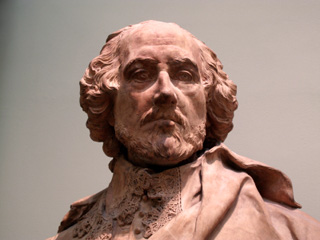 The Utah Shakespeare Festival has vaulted the small southern Utah city of Cedar City onto the contemporary map. Held each summer at Southern Utah University, the festival now ranks as one of the top four Shakespearean festivals in the country.

The Utah Shakespeare Festival has been acclaimed by critics around the world as one of the best Shakespearean festivals in the world.

And it has something few other such festivals have. A theater which emulates … because it was designed from original drawings … the 16th century Tudor stages.

In fact, it comes real close to duplicating the original Globe Theater where Shakespeare presented his plays. So close … in fact … that the BBC used it to film their Shakespeare series after a worldwide search.

The one time we attended this event, we were enthralled by roaming theater … Green Shows. Elizabethan dance and music. Punch and Judy shows. A raptor demonstration … hawks and golden eagles. And … of course … wonderful summer evening temperatures.

In fact, memories of that visit … and doing some of the research for this page … prompted us to plan another trip to the festival this summer … in 2011.

The festival won a Tony Award in 2000 for America’s Outstanding Regional Theater. The festival’s newest theater … the Randall L. Jones Theater … was featured in Architecture magazine in 1990. A beautiful building. It is used throughout the year for plays and musicals.

The festival performs three or four Shakespeare plays throughout the summer. But they also present two other plays … usually contemporary works. You can also sit in on literary and production seminars which discuss the previous day’s plays.

For detailed information about the festival, go to their website at:

Back to St. George Utah