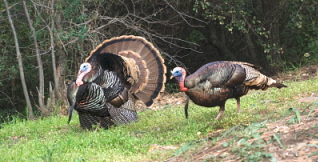 A Bird of Courage

That’s what Benjamin Franklin called the wild turkey. “A bird of courage.” In fact, if he would have had his way, the wild turkey would be our country’s national symbol. Not the bald eagle.

They are the largest of all Utah game birds weighing as much as 21 pounds. They are similar in appearance to domestic turkeys. But with longer legs and a more slender body.

The tips of the wild turkey’s tail feathers are white to light tan. The male’s breast feathers are tipped with black. And the female’s with white or buff.

There are two species of Utah wild turkey. Non-native Rio Grande turkeys were transplanted throughout the state in the 1980’s. Their numbers have exploded.

The other subspecies ... the Merriams ... are not as numerous. They prefer higher elevations in the ponderosa pine zones. And they’re limited to southern Utah.

It is possible that the Merriams are native to Utah. But that’s an ongoing debate.

Turkey courtship begins in early spring. The tom’s gobbling serves as a challenge to other males. And attracts females. Male turkeys provide no care for newly-hatched chicks.

The chicks – who quickly learn to feed themselves - follow the female. Several hens and broods will gather into groups of as many as 30. And that’s how you usually see them in the wild. In groups of a dozen or more.

What Do Turkeys Eat?

In the late 1800’s and early 1900’s, Utah wild turkey numbers were decimated. Like so many other species. By uncontrolled hunting and the inevitable loss of habitat as humans invaded.

Restocking programs have re-introduced wild turkey into their historical range. And introduced them into areas they had never been.

Utah wild turkey numbers are growing due to the conservation efforts of two organizations. The National Wild Turkey Federation. And the Utah Division of Wildlife Resources.

Hunting turkey in Utah is limited to the spring. And has been controlled by a lottery system for years.

I’ve seen wild turkey in southern Utah – on the Paunsagaunt Plateau. And my wife has seen dozens of them while running the mountain roads above the town of Midway.

It’s not as rare as it used to be but still quite a thrill when you’re lucky enough to see them.