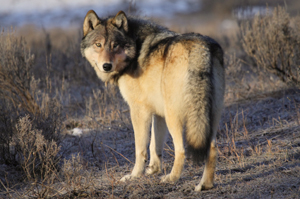 It wasn’t long ago ... a couple decades actually ... that Utah wolves were spoken of in the past tense. There weren’t any.

In fact, the last verified wolf taken in Utah ... according to the U.S. Fish and Wildlife Service, Predator and Rodent Control ... was in 1930 in San Juan County.

But many Utahns were recently startled by a story in the Salt Lake Tribune ... on September 25, 2010 ... of the sightings of as many as 15 wolves so far this year in the state. And not just running solo.

Where are they coming from? The U.S. Fish and Wildlife Service ... the USFWS ... has initiated a policy of reintroducing wolves into the northern range of the Rocky Mountains.

Well, it’s apparent that even though Utah hasn’t taken part in these efforts, the wolves don’t recognize state borders.

The natural migration of wolves from Canada into the northwestern Rocky Mountains of Montana over the years has resulted in several packs regaining a foothold there.

In 2002, those numbers reached 261 in Idaho and 218 in the Yellowstone area. The Montana population was determined to be 84.

And since 2003, there have been increasing reports of Utah wolves in Utah. Last year … in 2009 … there were nine reports throughout the state. But this year … 2010 … there have been 15. And it’s still September.

As you might expect, all this activity is quite naturally making people excited. And nervous. As these reports have increased, so have the reports of livestock predation.

And now, legislation has been introduced by two Utah congressmen to delist the gray wolf as an endangered species.

It ruled that the U.S. Fish and Wildlife Service didn’t have the authority to remove wolves from the endangered species list on a state-by-state basis. It had done so in Idaho and Montana to allow hunts in those states as wolf populations continue to climb.

Although not all reports of Utah wolves have been substantiated, the DWR … Division of Wildlife Resources … will admit that it is obvious that roaming wolves have wandered into the state from Idaho and Wyoming.

But they say there is no evidence of packs or breeding. Every sighting had been solo. Until now perhaps.

Most of the confirmed sightings this year have been in counties bordering Idaho and Wyoming. And two wolves were killed this year after attacking Utah livestock in these areas.

The Salt Lake Tribune article reports that on July 12, in the Uinta Mountains , someone reported seeing four wolves on the north side of Lily Lake just off the Mirror Lake Highway. The DWR says they don’t know if they were wolves or coyotes.

Then, not long after that, a University of Utah environmental studies graduate was camping at Washington Lake just west of the aforementioned Lily Lake.

He claimed to have experience around coyotes and wild dogs. And he has heard wolves in the wild.

He heard howling and shorter yelps which he is convinced was being made by a group of wolves. He and his companion made enough noise that the “wolves” became quiet and moved away. State biologists haven’t followed up on these reports.

On a personal note, it wasn’t too long after that my family and I spent the afternoon and evening at this same Washington Lake. Fishing. And hanging out at a campsite. But these reports became public quite a bit later so we weren’t aware of these “sightings”.

Two things are apparent. Wolves are moving into Utah. And state biologists … at least publicly … don’t seem to be in any hurry to investigate the growing population of Utah wolves.