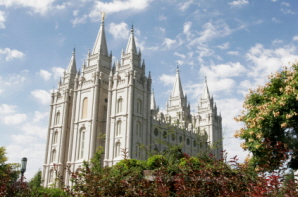 Salt Lake City is the home of the Church of Jesus Christ of Latter-Day Saints – the Mormons – with more than 13 million members worldwide.

Temple Square Salt Lake City, along with an adjacent block and several nearby buildings, comprise the church’s worldwide headquarters.

What does being Utah’s most popular tourist attraction mean in terms of numbers? Well, it means that 3 to 5 million people a year walk through the gates.

Sure it’s true that many of these visitors are Mormons from around the world. But whether you’re a member of the Church or not, it’s a unique must-see for anyone visiting Salt Lake City. 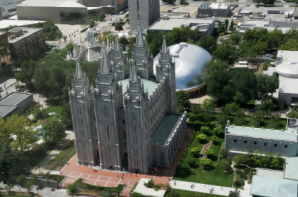 The centerpiece of Temple Square is The Salt Lake Temple. Construction of this magnificent granite structure began in 1853 and lasted 40 years.

As mentioned elsewhere on this site, The Chicago Tribune in 1893 declared that “the building was worth a trip across the continent to see.” Most visitors would say it still is.

When Mormon pioneers arrived in the Salt Lake Valley in 1847, Brigham Young selected a plot of land to “build a temple to our God”. When the city was surveyed, the block surrounding that spot was designated for the temple.

Shortly after the block was chosen, a high, granite wall was built around the block. Temple Square.

The domed Tabernacle was completed in 1867. It’s the home of the world-famous Mormon Tabernacle Choir and the Tabernacle Organ with 11,623 pipes. It was originally built to house the church’s General Conferences.

The overall seating capacity is now 8,000 including the gallery and the choir area. Its acoustics are unbelievable. A pin dropped at the pulpit can be clearly heard at the back of the hall. 170 feet away.

The Tabernacle was rededicated in 2007 after extensive restoration work. Organ recitals are presented daily. The choir and Orchestra at Temple Square rehearse weekly. 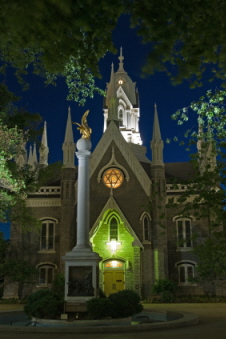 The Assembly Hall is a charming Victorian Gothic building with white spires and stained glass windows. Local and international artists perform at free concerts each weekend. It seats approximately 2,000 people. It was completed in 1882.

The North Visitor’s Centers was the first one built. It features an 11-foot replica of The Christus, a statue of Jesus Christ by Danish artist Bertel Thorvaldsen. As the LDS Church has grown, its headquarters has expanded into the surrounding area. The 28-story LDS Church Office Building was built in 1972. For years, it was the tallest building in Utah.

The grand old Hotel Utah, just across the street from Temple Square, was renovated in 1995 and renamed the Joseph Smith Memorial building. It contains 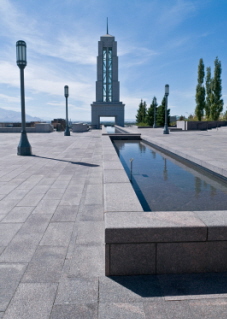 In 2000, a brand new 21,000 seat Conference Center was built directly north of Temple Square. It is used primarily for the LDS Church General Conferences. Concerts and other cultural events are also held here. 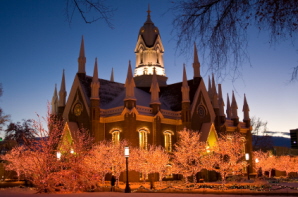 Christmas at Temple Square Salt Lake City is absolutely breathtaking. Hundreds of thousands of colored lights sparkle from trees and shrubs throughout the grounds. The lighting of Temple Square the day after Thanksgiving is a popular event attended by thousands.

It is the symbolic kick-off to the Christmas season in downtown Salt Lake City. With no reason to worry about “offending” anyone here, a full-size Nativity scene is also on display.

Some of the other attractions at Temple Square Salt Lake City include:

Free tours of Temple Square Salt Lake City are conducted in 40 languages! I highly recommend you include a visit to Temple Square no matter what your background.