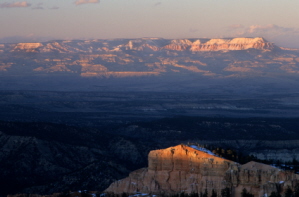 The Grand Staircase-Escalante National Monument was established in September 1996 by President Clinton.  A very controversial announcement at the time.  Still is.

The remainder was to be broken up into three separate areas.  Now we are waiting for the lawsuits to crawl through the courts.  They've been filed by outdoor and recreation groups to stop this latest change.

This story is ongoing.  Below you'll read my original page about the national monument.

Covering 1.7 million acres, Grand-Staircase Escalante National Monument dominates a map of southern Utah! It is the first monument to be administered by the Bureau of Land Management rather than the National Park Service.

Its geologic footprint is more varied than many national parks:

You can see them all here.

But it’s an untamed and hostile land. And can be deadly if you’re not prepared. Nonetheless, you’ll be able to enjoy: 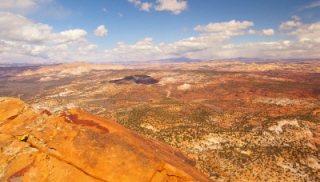 The Grand Staircase-Escalante National Monument is a vast and seemingly desolate area. The last place in the continental United States to be mapped. It remains a mysterious and relatively unexplored frontier due to its vastness. And its bone-dry conditions.

The monument covers 1.7 million acres of public lands. Many people in the state of Utah were extremely upset when President Clinton designated these lands as a national monument without any discussion or warning in September 1996.

Making these lands available to mining interests would have brought huge monetary rewards to many of these people. But even though these lands were located in Utah, they were “owned” by the American people. The debate continues today.

Why The Name Grand Staircase?

The land ascends up into wide, sloped terraces – a staircase. But at the southern end, instead of a staircase, prodigious intensely hued cliffs rise up. Pink. White. Gray. Vermilion. Millions of years of geologic history visible in dramatic escarpments.

The Grand Staircase-Escalante National Monument is an extraordinary “gold mine” of information for scientists because of the area it covers and the unique mix of resources found here. Once again, that’s also a reason for the intense backlash which occurred after the monument was set aside.

But geologists, archeologists, paleontologists, biologists and, of course, the many visitors to the monument are happy these lands are now protected from development. 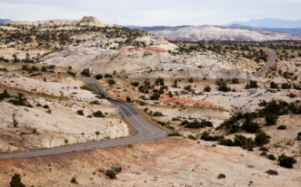 The Grand Staircase is divided into three distinct sections:

These three sections are very dissimilar in terms of topography. But they are similar in certain respects. They cover a large area. The terrain is extremely difficult.

And, despite being located in the continental United States, unusually remote. Factors which combine to make this a dangerous and inhospitable land if you’re not prepared for it. But if it’s solitude and adventure you seek, you’ll find it here.

The Grand Staircase section of the Grand Staircase-Escalante National Monument is probably the most familiar section if you’re at all acquainted with the monument. More than 6,000 vertical feet of slopes, cliffs, and terraces make up the “staircase”. It extends approximately 150 miles (241 km) from the north rim of the Grand Canyon to the top of the Paunsaugunt Plateau directly west of Bryce Canyon National Park.

Each “stair” is a cliff or slope as much as 2,000 feet high. Each plateau or terrace is as much as 15 miles (24 km) wide. The origin of the name Grand Staircase is unknown but it’s easy to see where it came from.

Great views of the entire staircase are few and far between. Perhaps the best is south of Kanab along Route 89A in Arizona. You can also see portions of the staircase east and north of Kanab.

If you could see it from the air, you would see that the Plateau fans out southward from Escalante into an immense triangle. The triangle ends miles south at Lake Powell and the Paria Plateau. With over 800,000 acres, the Kaiparowits Plateau includes the most desolate, arid, and remote parts of the monument.

If you look north from the Glen Canyon National Recreation Area - Lake Powell – the skyline is dominated by Fiftymile Mountain which is a prominent part of the plateau. It rises from Lake Powell nearly 4000 feet to an elevation of 7584 feet.

The northeastern edge of the plateau is defined by the Straight Cliffs - broad sandstone flats of the Escalante River. The western edge is bordered by the Paria River, Cottonwood Canyon, and the Cockscomb.

The southern end of the plateau is carved deeply by tributaries of the Colorado River. These are now major branch channels of Lake Powell. The plateau covers an area of approximately 1650 square miles (4225 square km). 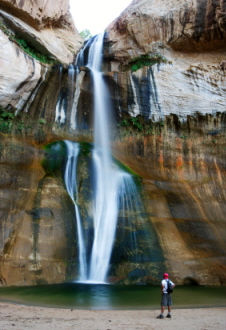 Southern Utah has been the backdrop for many environmental battles over the years. And the Kaiparowits Plateau was the subject of one of these battles. In 1965, the Southern California Edison Company wanted to build a 5000 megawatt coal-fired generation plant right in the middle of the plateau.

Fueled by the massive coal deposits in the plateau, more than 4 billion tons of fuel could have resulted. Producing electricity for the exploding populations of Los Angeles, San Diego, and Phoenix.

What was seen by some in southern Utah to be a potential economic windfall met with increasing opposition from environmental groups and federal regulatory agencies. This was right after many beautiful canyons were flooded by the Glen Canyon Dam and created Lake Powell. The proposal was dropped in 1975.

The Canyons of the Escalante

The Escalante Canyons include some of the most magnificent and wild terrain in America. Of course, you could say that about all three sections of the monument. To illustrate this point, the Escalante River was the last river in the continental United States to be named. It snakes lazily beneath towering canyon walls.

The Escalante’s tributaries flow by arches, through natural bridges, and over waterfalls. It’s been described as much like Glen Canyon before Lake Powell flooded it. Some of the most extraordinary desert hiking – for those who are prepared - in the west is found in these canyons.

The Canyons are a part of a natural basin rising up to higher levels of the Colorado Plateau. The Colorado Plateau rises as high as 11,000 feet and drops to as low as 3,700 feet at Lake Powell. Despite the beauty of the region, let me repeat. It’s a remote and dangerous area for the unprepared. There are very few marked trails. Hardened and fit visitors can expect a challenging and isolated adventure. But it isn’t suitable for the unprepared or unfit. 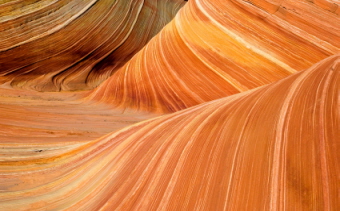 What To See Nearby

The road between Escalante and Torrey – 32 miles (52 km) long – has been described as the most scenic road in southeastern Utah. But if I had to recommend only one thing you should experience in southern Utah, it would be to drive Highway 12. Stretching more than 120 miles (193 km), Car and Driver magazine rates it one of the top 10 scenic byways in America.

Passing through some of the most spectacular scenery anywhere, it lets you experience Red Canyon, Bryce Canyon National Park and Grand Staircase-Escalante National Monument. It takes you over Boulder Mountain in the Dixie National Forest and ends near the entrance to Capitol Reef National Park.

How To Get To Grand Staircase-Escalante National Monument

Two paved roads give you access to the national monument. Highway 89 from the Kanab/Big Water area. And Highway 12 from the Escalante/Boulder area. All of the other roads are remote and undeveloped. 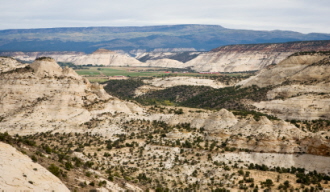 There are some fantastic hiking adventures in Grand Staircase-Escalante National Monument. Since there are only a couple roads leading into this area, one of the only ways to really see this amazing country is by hiking it. If you are fit, able, and prepared.

Whether you’re looking for a shorter day hike or a challenging multi-day adventure, you’ll be able to find solitude and scenery unlike anywhere else. And the sunsets are absolutely incredible.

Some popular hikes in the monument include Upper and Lower Calf Creek Falls, Escalante Natural Bridge, and some of the Hole-in-the-Rock Road hikes.

If you need some help to find your way around, there are top-notch professional guides available to help you explore this amazing land - Grand Staircase-Escalante National Monument.