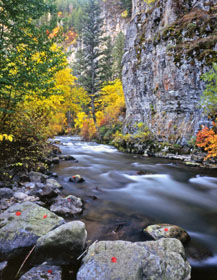 The Logan River cascades down through stunning Logan Canyon and the Wasatch-Cache National Forest towards the city of Logan in the Cache Valley.

One of my favorite places to go in Utah. My wife’s family has owned a cabin up this canyon … right beside this river … for almost a century. We get up there at least once a year. Sometimes more.

There are a couple of possibilities for the name. One story gives credit to a mountain man named Ephraim Logan who frequented the area. He was a member of Jedediah Smith’s party and was killed by Indians in 1828.

But the Logan newspaper … the Chronicle … in 1907 stated that the city was named after a friendly Indian chief named Logan Fontenelle. Wherever the name actually comes from, it lives on as a city, a canyon, and a river.

People drive up this canyon to enjoy year-round outdoor activities. Hiking, camping, fishing , skiing, snowmobiling, biking, photography, or hunting . And if you want to treat yourself to some of the most stunning fall colors you’ll see anywhere, drive this route in the fall.

The Logan Canyon National Scenic Byway takes you from the town of Logan ... through the magnificent Cache Mountains ... and back down to the deep blue waters of Bear Lake . One of the best trout fisheries in the state ... the Logan River ... runs in tandem with the byway. Bring your fly gear and indulge yourself.

Back in the 1930’s, the Logan River actually produced a 37 ¾ lb. brown trout from the First Dam Reservoir. Odds are that you won’t find anything near that big in the Logan these days. But there are still some big fish to be caught.

There are three impoundments on the river … first, second, and third dams. All three are within 5 miles distance of Logan. And they are all stocked with rainbows throughout the summer. This year, 2nd dam was stocked with some big cutthroats as well. 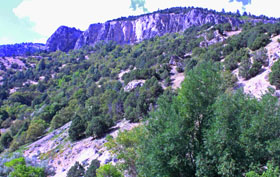 Special Regulations on The Logan River

It’s always a good idea to check the regulations each year. They do change although the following regulations are the most recent as of 2011.

From Card Canyon Bridge downstream to Cutler Marsh west of Logan, the trout limit is 4. This includes the three impoundments. The bridge is about 10 miles from Logan.

From Card Canyon Bridge upstream to the highway bridge at Red Banks Campground, the limit is 2 trout and whitefish in the aggregate. Only artificial flies and lures are allowed in this section.

From the Highway Bridge at Red Banks Campground upstream to the Idaho state line, the limit is 2 trout and whitefish in the aggregate. This upper section is closed from January 1 through the 2nd Saturday of July at 6 a.m.

How to Fish the Logan River

Most of the fish caught in the Logan River these days are stocked rainbows. There are also wild browns and rainbows. And a small cutthroat population.

There was some debate about whether the cutthroats were from the original Bonneville strain or if they were a result of stocking the Yellowstone strain. It’s a moot point now as the DWR continues to stock some of the impoundments recently with cutthroats.

The DWR stocks the river and impoundments heavily with catchable rainbows each year. This makes the impoundments especially good for summer holiday fishing for the kids.

The Logan above the impoundments is pretty much a wild trout fishery as browns and cutthroat have reproduced well in this river.

One of the best things about the Logan River is the scenery. Much of the river is fast-flowing due to the canyon’s steepness. There’s lots of pocketwater. Along with riffles and long runs.

Beginning in mid-July, expect good fishing on caddis patterns. Elk hair caddis and stimulator patterns should be very effective. Especially so in the Franklin Basin area.

Caddis are a major part of these fish’s diet. Even long after the naturals are gone, imitations produce strikes. It’s simply because the fish are so used to seeing caddis. So you can try them year-round up here.

Other flies that work well:

In the fall, try going after big browns. They’re spawning in the late fall and early winter. This is when they become highly aggressive especially when presented with a minnow-imitating fly or lure.

Look for these big browns in the lower third of the river. Woolly buggers, muddlers, zonkers, and big streamers work well. As do stonefly nymphs, mayfly nymphs, and caddis nymphs. But go deep. 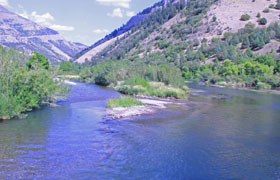 What Else Should You To Know
About The Logan River?

Wading the Logan can be tricky … even risky … along some of its length. The banks are steep and the overgrowth can be thick. In some places, the trees hang way out over the river’s edge.

You can fish along the shoreline but watch out for the trees. Nothing is more irritating than spending half your time unhooking a fly from a tree. I know, I’m good at it.

But there are quite a few stretches where you’ll be able to find a piece of the river for yourself. Especially if you avoid holidays and weekends.

The Logan is open year-round. Spring runoff normally ends by early June. That didn’t happen this year … in 2011 … though. After a very heavy winter snowfall, the calendar seemed to be adjusted backwards a couple weeks. In fact, as of September 9, the leaves in the canyon hadn’t even started changing color yet.

Be aware of rattlesnakes. There’s not supposed to be many of them left in this canyon. But this year, there were a record number of snakebites reported. Some people think it’s because of the heavier than normal growth due to the excess winter and spring moisture.

How to Get There

Logan is 69 miles northeast of Salt Lake City. Take US 89 up Logan Canyon. US89 follows the river for almost its entire length. Where 89 veers right away from the Logan, the Franklin Basin Road continues up to the Idaho state line.

When Should You Fish the Logan?

A good time to fish the Logan is when water levels from the spring runoff start to drop. Usually the middle of June in most years. Fishing remains good throughout the summer. And September and October get even better.

Remember … as mentioned above … about fishing for the big browns moving into the lower third of the river in late fall.

There are 10 campgrounds in Logan Canyon:

Back to Fishing in Utah