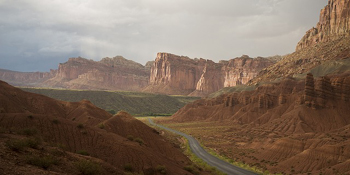 It follows SR-24 between the towns of Loa and Hanksville in the southern part of the state.

The byway cuts right through the heart of Capitol Reef National Park . And takes you near the Fishlake National Forest, Canyonlands National Park, Goblin Valley State Park , and the San Rafael Swell . And if you’re planning on taking this drive, you’ll be so close to many other southern and central Utah attractions.

From the west end, the byway traverses the rolling desert … sagebrush-covered … continuing past the turn-off to Fish Lake. You’ll pass through several charming little towns along the byway … Loa, Lyman, Bicknell, and Torry. Friendly little towns with good accommodations if you want to stop.

As you travel further along the route, you’ll parallel the Fremont River as it heads towards Capitol Reef National Park. The park is named after the white Navajo sandstone which makes up the domes and peaks … up to 1000 feet thick.

They look like the domes on the US Capitol building. And on many state capitol buildings. Reef is a nautical term used to describe a barrier. Hence, the name. Capitol Reef.

Although the byway officially ends at Hanksville, SR-24 continues north from there. As you follow it north … less than ½ hour … you’ll find Goblin Valley State Park on the left. And a little further on, the San Rafael Swell.

The byway covers 162 miles. Plan on about 4 hours.

Back to top of Capitol Reef Country Scenic Byway

Back to Utah Scenic Byways